In November 2021, SVW coordinated with Pu Mat National Park and the authority of Mon Son commune in Con Cuong district, Nghe An province to organize two workshops on raising awareness about the enforcement of forest and wildlife protection in Co Phat and Ban Bung – two villages in the core zone of Pu Mat National Park.

A total of 100 locals attended two workshops – a very significant number given that all the households on the guestlist attended. This adds to the total number of people attending our workshop series on wildlife to 1,219 people, including local people, village authorities, reputable people in the community, and government officials in the core and buffer zones of Pu Mat National Park.

According to Ms. Le Thi Kim Ngan – Education Outreach Coordinator of SVW: “The venue for this workshop was chosen to learn from the experience of previous commune-level workshops. At that time, some people in Co Phat and Ban Bung had to walk more than 5 hours to go to the commune headquarters to participate. Therefore, we selected Ban Bung and Co Phat – two villages in the core area of ​​Pu Mat National Park as the venue for this workshop, and the location of the workshops not only helped reduce the problem of long-distance travel but also encouraged the full participation of local people in these areas.”

The purpose of these workshops is to disseminate knowledge of forest protection laws to people in the core area, and at the same time to inspire people to love nature and wild animals, so that people can learn to love and cherish the priceless resources of Pu Mat forest, as well as affirm the important role of people living in the core zone of the forest and the headwaters of the Giang River in protecting Pu Mat forest.

At the beginning of the Workshop, Mr. Dang Dinh Xuan – Deputy Head of the Pu Mat National Park Ranger Department gave an opening speech about the necessity and importance of strengthening cooperation in law enforcement on the protection of natural resources and wildlife around and in the core zone of Pu Mat National Park. Following the speech of Pu Mat National Park, the representative of Mon Son commune’s authority, Mr. Nguyen Van Thao – Vice Chairman of the Commune People’s Council also delivered a speech to direct village officials and local people to actively participate in the program “Con Cuong District Says No to Illegal Wildlife Use” to turn Con Cuong into a pioneer district in not using illegal wildlife. At the Workshop, the rangers of Pu Mat National Park took turns to share about Pu Mat’s diversity of resources and the importance of Pu Mat National Park, as well as some information about legal knowledge on forest and wildlife protection to people in the core area, in order to raise people’s spirit and awareness of forest and wildlife protection towards Pu Mat forest.

Besides presentations of representatives of Pu Mat National Park, Mr. Vi Van Dinh – a member of the Anti-poaching team at Pu Mat National Park also presented at the workshop about why people need to conserve wild animals and Pu Mat forest, and along with the talk about wild animals from SVW’s Education Officer, local people can understand the values ​​that forests and wildlife bring to their own lives and for their descendants in the future so that people can raise their awareness of protecting forests and wildlife in their own homeland. During the break, the attendants saw and discussed about the exhibition photos of Pu Mat National Park that the organizers displayed at the Village Hall – where the workshop took place. Also at the workshop,  Mr. La Van Tam – Head of Co Phat village, who is also one of the members in the list of households selected to participate in the workshop shared: “People in the village and I heard that there is a workshop taking place in the village, so although it was raining and the road was slippery, we still tried to attend the workshop” and he added, “I completely support organizing workshops like this in the village, and I just hope that after the workshop, people can understand more about legal knowledge about forests and wildlife so that people can reduce their impact on the forest and implement the THREE NOES commitment”.

After the workshop, 100% of the participating households signed the THREE NOES commitment: No hunting and exploiting in the forests of Pu Mat National Park – No trading, transporting, storing, or using illegal wildlife – No assisting in any form with illegal activities related to wildlife. After that, participants stayed until the end to receive gifts and take photos with the organizer. In the following days, Pu Mat National Park ranger and SVW’s Anti-poaching team will continue to talk to people who did not participate in this workshop to agree to sign the commitment to protect Pu Mat forest. 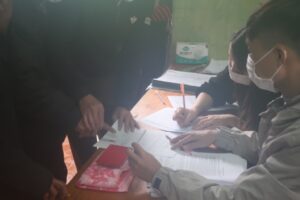 100% of the participants signed the THREE NOES commitment to protect the forest and wildlife of Pu Mat National Park. Participants stayed until the end to receive gifts and take photos with the organizers.

Through the workshops this time, SVW and Pu Mat National Park aim to help people better understand legal knowledge, and learn to love and cherish the invaluable resources that nature has favored them, thereby helping them to behave in accordance with nature and wildlife, thereby contributing to the protection of the biodiversity of Pu Mat.

More Than 4,500 Students in the Buffer Zone of Pu Mat National Park Are Ready to Participate in a Wildlife Conservation Education Program